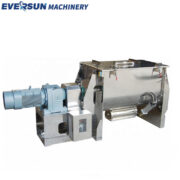 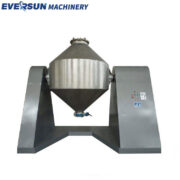 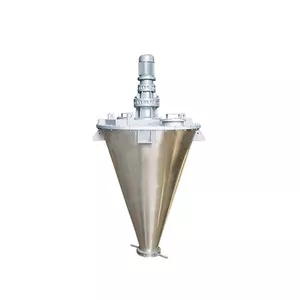 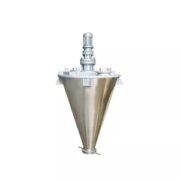 Descriptions:
The material is made to conduct a compound motion in the cone because of the rotation and revolution of the screws. The effected motions include:
1. The revolution of the screw along the wall making the material conduct a circumferential motion;
2. The rotation of the screw making the material rise along the screw from the cone bottom;
3. The compound motion of the ratation and revolution of the screws making partial, material be absorbed into the screw cylindroid meanwhile, under the action of centrifugal force, the partial material in the screw cylindroid discharges radially.
4. The rised material drops under its sole weight. The four kinds of motions effect convection, shearing, diffusion in the cone , thus quick and even mixing can be achieved.
Özellikleri:
1 This model of machine can be equipped with single screw , double screws, tri-screws.
2 It can be equipped with flying-entter aditionally, so as to meet the requivements for special technology.
3 The discharge valve adopts two ways , one is manual or the other is pheumatical.
4The power of motor can be enlarged for special material(strengthening type).
Uygulamalar:
It is suitable for chemical industry, pharmaceutical industry pesticide, dyestuff , petroleum industry, metallurgical industry, construction material and etc . Such as in the mixing, reaction, kurutma, cooling of powder and powder(solid-solid), powder and liguid (solid-liguid), liguid and liguid ( liguid-liguid).